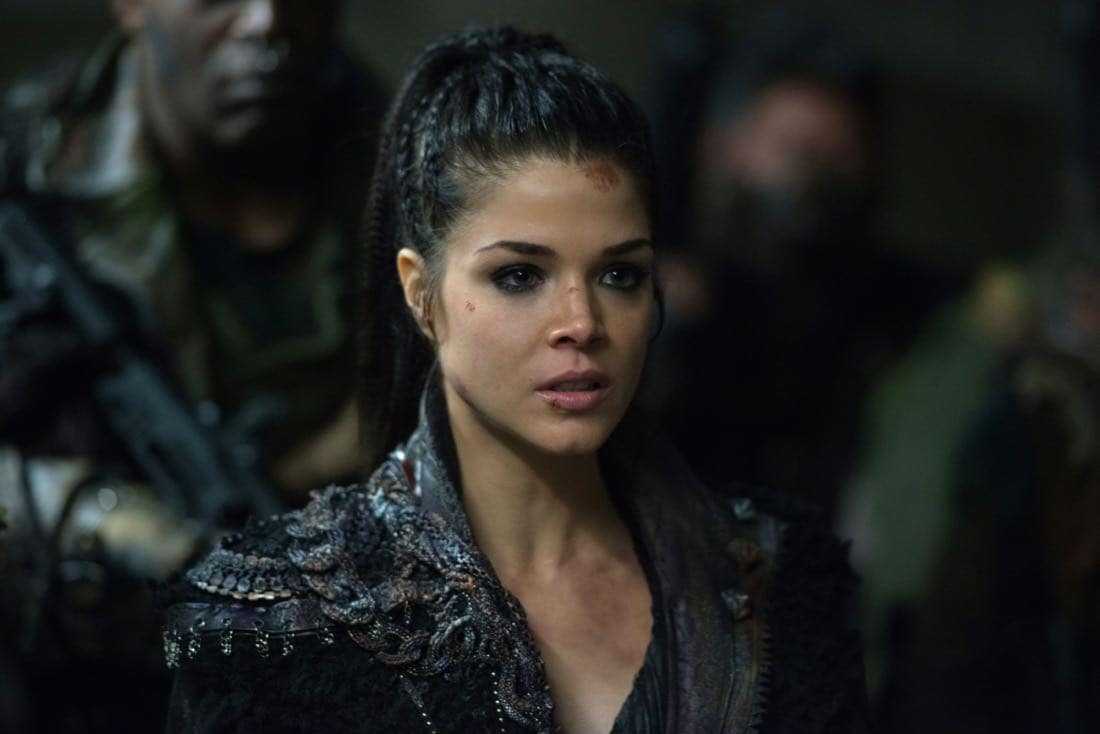 Last week on The 100, things got pretty dicey — and we still aren’t even at the finale yet! After losing Jasper, Clarke flip-flopping her sketchy judgement calls and Octavia proving to be the truest warrior queen the earth needs, The 100 jumps into yet another chapter with chaos and conflict as we head toward the conclusion of the fourth season.

Initially, it seemed as if Octavia’s idea to let the bunker belong to all people was a solid plan — until Clarke and Jaha showed their hand by removing trust from the equation. Now that it is open again, the grounders take over the primary levels, and Skaikru is left to pick their list of 100 (excluding the obvious characters we know and children). Clarke and Bellamy are secured beds in the bunker, but, in an attempt to not feel as soulless as Clarke has been in the past, they decide to venture out in search of Raven to bring her back before they need to seal it off from the death wave. Murphy and Emori tag along, causing Abby to grant Murphy a spot — but not necessarily Emori.

Murphy reveals to Bellamy that he is mostly just wanting to make it to Becca’s lab because, although it isn’t a safe haven, it’s still the most solid chance that is primarily unknown to others. Unfortunately, that bothersome troublemaker Echo overhears the tea and now has potential to piss people off yet again. Back where the decision is being contemplated, Kane shares the lottery concept with his people and is predictably met with some animosity. Backlash begins to make its way to Niylah, but Octavia puts an end to the aggression with her newfound position of power or at least intimidation. Jaha tries to get Octavia to help “her” people; however, Octavia is quick to point out the hypocrisy after living in the floor of a spaceship and the unnecessary death of her mother at their hands. At this point, Jaha and Skaikru are purely lucky that she feels the need to look out for anyone other than herself and her brother.

With things settling down, the process to determine the new 100 (or 80 something) commences, and Miller’s father offers his son’s name in place of his own to better Miller’s chances at surviving — way to go pulling at heartstrings! Abby additionally takes the time to tell Kane he’ll draw an extra name because she doesn’t feel right being guaranteed a spot over anyone else. Despite the fact that she’s the primary doctor of the entire group, maybe Abby is just kind of over the whole survival concept? Just when you think things will go relatively smoothly (in a life or death fashion), Kane catches Jaha leave the drawing in a very unreliable Jaha-esque manner, so he takes it upon himself to see what Jaha is concocting.

Kane tracks down the former leader of Arkadia, and Jaha shares his plan to gas the Grounders out of the bunker and threaten them with destroying crops, but, fortunately, Kane is able to convince him it is — first and foremost — a horrible idea that nothing good will come from. Having already riled up the crowd, Octavia and Indra open the door to the riot and find the entire crowd was gassed to cease any further rioting that could get them all killed. Instead, they use the list Clarke compiled episodes back which exchanges the lottery idea entirely and is an easy cop out to pin on her (just from an observatory standpoint). Kane picks out the unconscious group of people, which includes Abby, and the decision is made – casting all others not picked to the outside area where they will be left to live out their remaining time before the radiation sweeps the area.

Bellamy and Clarke are on their way to save Raven but have a chance to reconnect and try to move past their issues (Bellarke fans forget the whole ‘nearly killed you’ aspect). The powwow is cut short when they hit something with the rover, and Bellamy steps outside to see who he hit. The four are then ambushed by Grounders who nearly kill the group until former problem child Echo saves the day with a nifty bow and arrow. Echo (as it turns out) followed them to seek security in the lab Raven is located at, giving her an extra hazmat suit to protect from increased radiation. Emori coughs up blood shortly after, and we learn that her helmet was broken during the scuffle — Murphy opts to give her his own (aww), but Clarke gives her own to test out her newly-infused Nightblood.

Clarke suggests that, if this test works, they can create more strains to save everyone, but Clarke’s plan loses steam when she begins to cough up blood too … back to the drawing board. By the time Monty and Harper meet up with the others, they have an extra mask for Clarke (RIP Jasper), and it is evident that they missed the chance to pick up Raven and make it back in time to join those in the larger bunker made up of all factions. With the revelation that they can’t make it back, Clarke offers a new plan: go back to space. With the opportunities to survive dwindling, the eight decide they’ll use the lab’s technology to make a return to the station where they are guaranteed at least five years of survival (oxygenator, food, water) to figure out the next step.

This was a rather strong episode that made the series come full circle (return to space!). The separation of groups, merging of societies and notion of a space shake-up brings The 100’s energy back to its prime. With one episode remaining and consistently impressive episodes progressing towards the finale, The 100 remains the best sci-fi-influenced series on television.

– Sending a big part of the team to space for multiple years could create a great time-jump for The 100 to utilize next season.