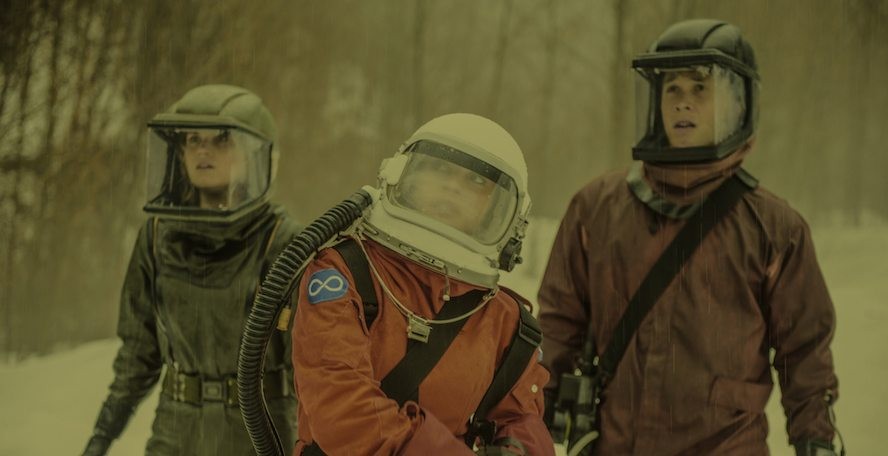 The 100 has reached its Season 4 finale, and the death wave finally makes its presence known — creating a thrilling episode to conclude that promises to drastically change things up for The 100. If that isn’t enough, the episode includes plenty of massive Season 1 throwbacks and a potential hint at what trouble is on the way for Season 5.

The episode starts off by giving us a look at Octavia and Bellamy’s farewells, as he and others prepare to return to space, and Octavia realizes she will manage the entire population inside the bunker — something Bellamy assures her she is capable of handling. Bellamy even makes reference to her capabilities over his own and Clarke’s, an excellent reminder of how far Octavia has come in a whopping four seasons of survival. Unfortunately, the radio cuts out, and, next thing we know, Clarke doesn’t even have an opportunity to say goodbye to her own mother. Octavia’s final message to Bellamy is “I love you big brother. I guess it takes the end of the world for me to say it” before a complete loss of communication. Octavia knows now that her life is forever changed, so she takes her presence to the bunker of people, bearing Lexa’s symbol of leadership and suggests that they will absolutely survive what’s to come, and, as a united front, they will radiate as a stronger population. Soon after the empowering speech from Octavia, the bunker is shaken by outside forces, and what comes of it is left to the imagination (for now.)
In the semi-safety of Becca’s lab, the small space-bound group watches the death wave roll through land, completely wiping Polis out of existence before their very eyes. The drone is destroyed in the process, leaving them blind to what comes next but Raven realizes they are extremely limited on time until it eventually reaches the crew. The preparations for a five year space journey commence, but Clarke and Bellamy take a minute to have a one-on-one conversation about Clarke’s concern for her mother’s visions of her dying (Raven had accurate visions as well.) Clarke also reiterates to Bellamy that she has no doubts that he is a completely loving person who has done nothing but his best efforts to care for his sister – as if they want affirmations that the decisions they’ve made thus far are acceptable.
With time running out, Monty and Murphy are granted the task of obtaining an oxygen scrubber and in the process, Monty removes his gloves to do so causing his hands to burn from radiation (very sacrificial of Monty to do so.) They try to carry the necessity back to the lab, but Monty passes out from the pain and that’s when Murphy makes the choice to leave Monty and take the oxygen scrubber back before time runs out. At the same time, an explosion is set off at the lab and Raven begins to worry that they are trying to make this trip too quickly – also now lacking an important communication system to establish power/connection. Raven realizes that it can be done another way (through the satellite towers similarly to ALIE’s transmission from before) and Clarke takes on that task so Murphy and Bellamy can go back for Monty.
Monty regains consciousness just in time and is helped back to the lab – but now Bellamy realizes that Echo has vanished to cover her face in paint and blood as a sacrifice. Bellamy is quick to tell her she’s needed to survive but Raven is under high stress levels and doesn’t have any time for random freak-outs (get with it or get going Echo!) The clock is ticking so Clarke is forced to climb the satellite herself to manually connect to the ring and give the remnants of the ark / station power. Just as they are out of time, others hope to wait it out for Clarke but Bellamy states that she would want them to leave (Season 1 nod) so they seal the hatch and prep to launch. The ship is next seen space bound as Clarke watches from below, before reaching the top of the satellite with nearly moments to spare, connecting successfully and granting them power that they won’t know about until they actually arrive to the space station. With all of the space crew feeling guilty about Clarke, they see a feint light that indicates Clarke was successful – as they are nearly ready to dock their ship.
Clarke is next seen making her way back to the lab, falling and cracking her helmet, leaving her covered in radiation burns and a power loss – while we see the ark group wake up (Bellamy saved them all by connecting the oxygen scrubber) and they look to Earth to discover parts of the planet are now seemingly burning due to the radiation, looking as if survival on the Earth is an improbability. Now things get a little interesting next – as we skip six years and seven days to find Clarke trying to establish communication with Bellamy. Clarke (with a haircut and red streak) attempts to let them all know the Earth has been livable for a year now but there has been no communication with the bunker that has since been impossible to access through excessive rubble. Clarke hasn’t heard from the space group either, but sees a ship in the distance that appears to be attempting an Earth landing. The former leader turned guardian wakes up a little girl in her rover (named Madi) who is referred to as Nightblood and suggests she is excited to reconnect with her friends. The excitement is cut very short however, as Clarke and Madi realize this is a much larger ship that is a prisoner transport from the mysterious and or ominous “Eligius Corporation.” Just like that – The 100 concludes its fourth season by addressing the death wave, yet now an entirely different problem presents itself and suddenly I can’t wait to see what the fifth season has in store for us.

The 100 knows how to deliver a solid finale episode, so this sense of coming full circle was the most appropriate decision this season. I was glad to see the death wave has been addressed, but this next season already feels like it has potential to be one of the strongest yet. I also truly enjoyed the time jump, giving us new storylines and character changes to focus on that differ from what we have already experienced. The 100’s season finale is another poignant reminder of how powerful and suspenseful a show can be after several seasons and that it’s the best sci-fi series on TV, one of the best dramas and CW’s absolute best example of current programming.

– Holding out hope that Octavia is safe and leading with excellence, but my gut says otherwise.
– This new antagonist/mystery group has potential to completely shake things up for every living being after supposed “unity.”
– I was glad to see Clarke offer herself up, but I think it showed more of her feelings for Bellamy than anyone else involved.
– The ending scene essentially restarts The 100 with a new perspective and now the characters we know are the true Grounders.
– I have enjoyed recapping, reviewing and covering the season once again – I absolutely love the series and having the opportunity to truly geek-out with others who share the same passion. May we meet again next season!